Yay! I’m so excited for you to play this SUPER fun Christmas-themed Jeopardy game! You and your people are going to have sooooo much fun together!

If you haven’t yet received an email with the downloads, be sure to check your junk folder. You should receive the downloads within just a few minutes of purchase, but if you have any problems, don’t hesitate to email me: mauri(at)theamericanpatriette.com and I’ll get you taken care of!

Here are the downloads you’ll receive:

Here are the household items you’ll need for game assembly:

Instructions for making the game board: 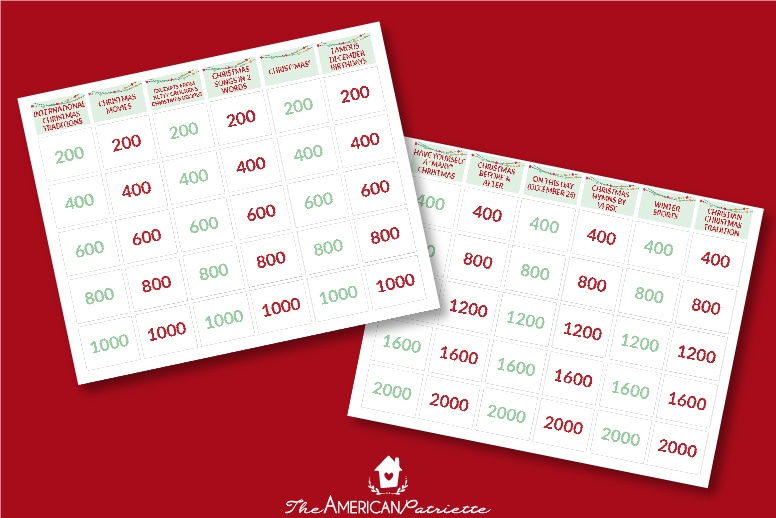 A) Print out the category headers (2 pages) and the dollar amounts/clues.

B) The dollar amounts/clues were designed to print front and back. Follow your computer’s/printer’s instructions for printing that particular document front and back. I’ve designed the pages so that it’s easy to identify which clues belong to which category, and there are page numbers for your reference before you begin cutting. 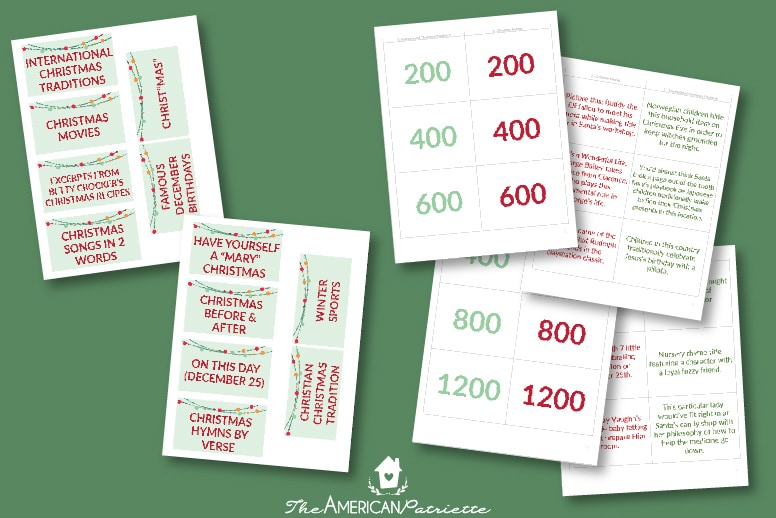 Once you’ve printed, you’ll begin assembling the board. 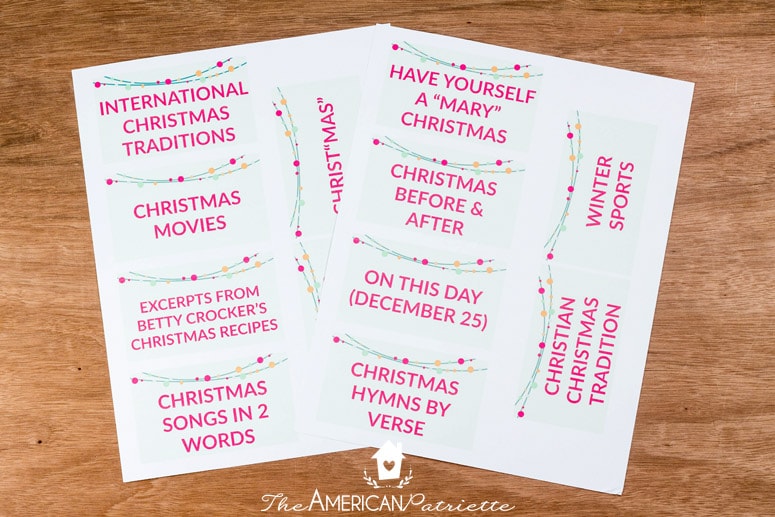 Printed dollar amounts on front and clues on back: 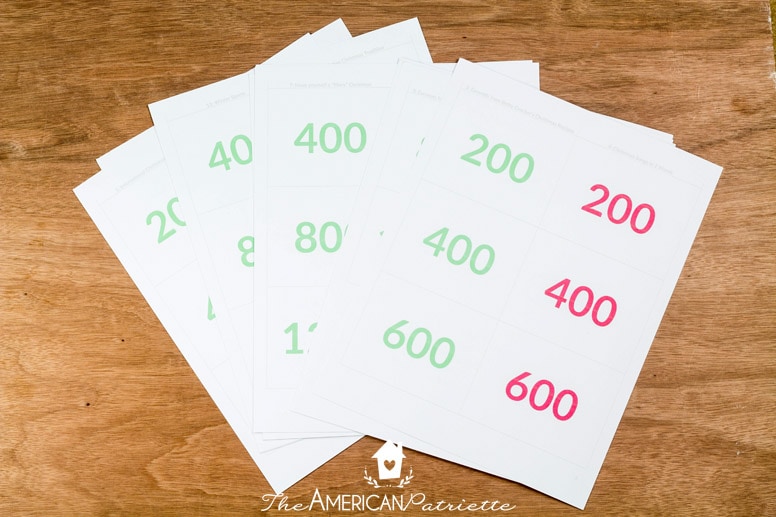 Step 2: Cut out Round 1 Category Headers 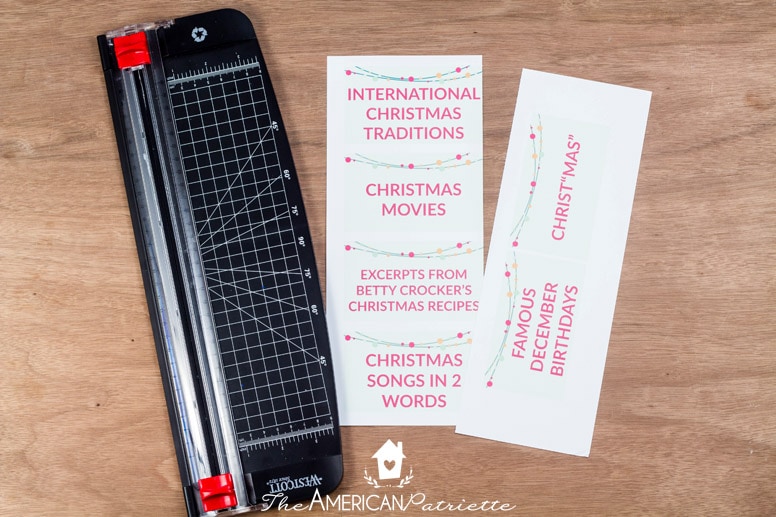 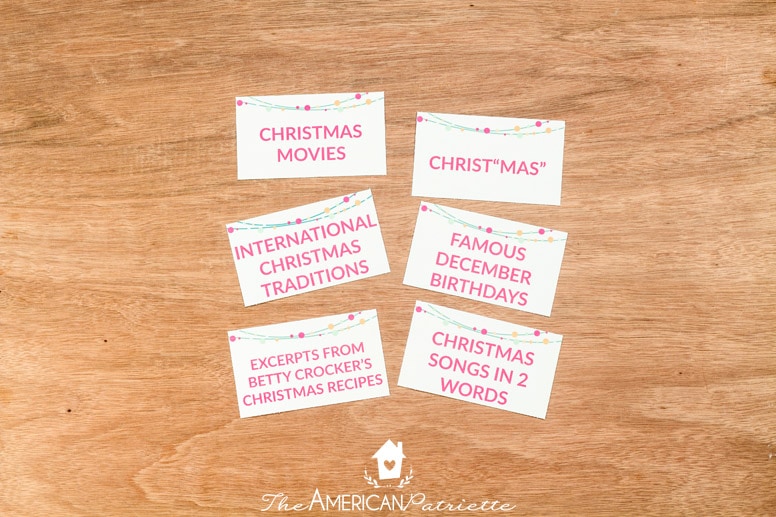 Set them aside after you cut them out, but go ahead and put them in order that they’ll be on the game board and set them just above your work space. Now you’re going to start cutting out the dollar amounts/clues for Round 1.

Tip: use the grey guides printed on the papers to help you easily make your cuts! 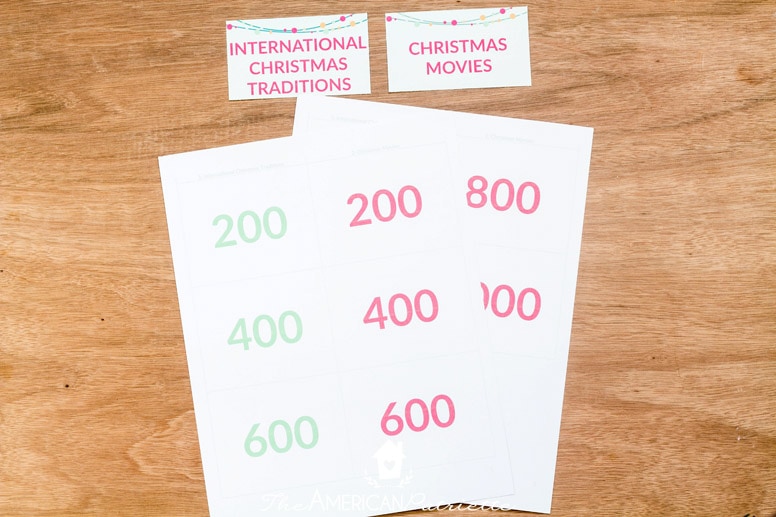 Once you’ve cut dollar amounts/clues from one page, immediately put them under their heading so you don’t get them mixed up with all the others you’re going to be cutting later. 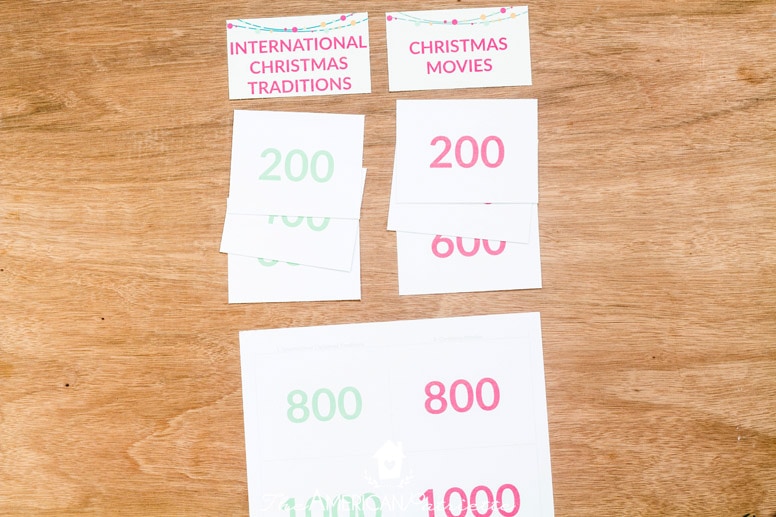 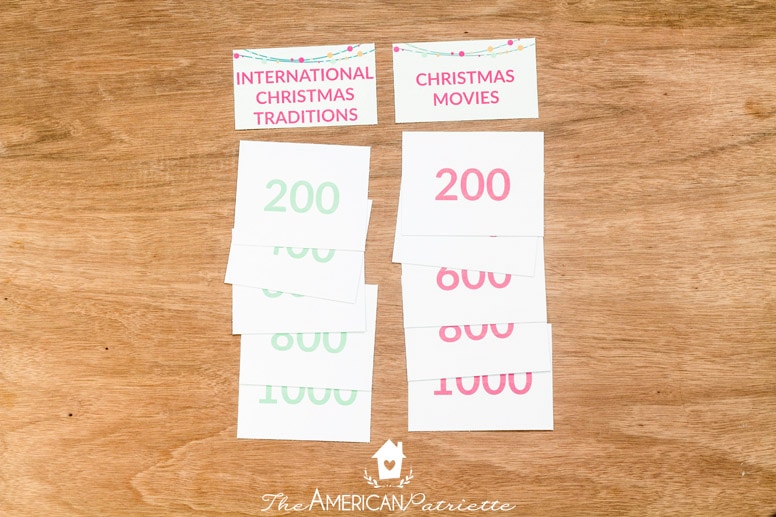 Continue this process until you’ve cut out all of the dollar amounts/clues for all Round 1 Categories. 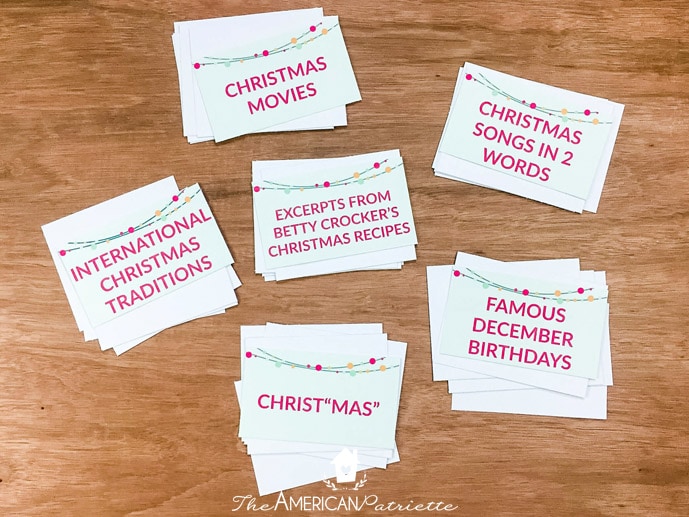 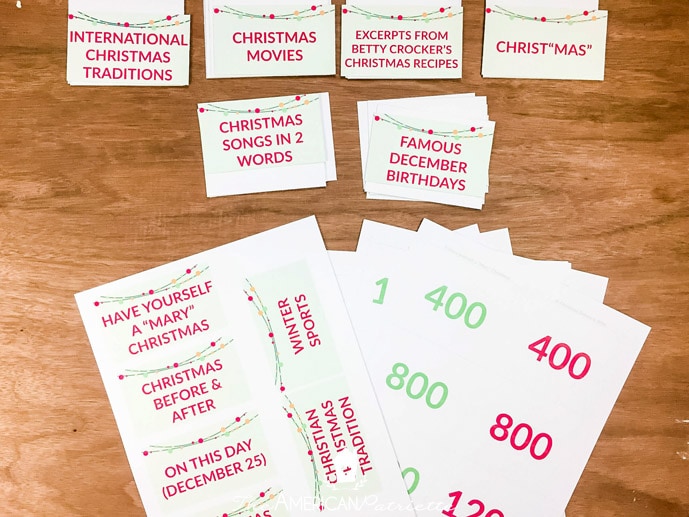 Follow the same process for cutting out Round 2 category headers & dollar amounts/clues. Set them aside. 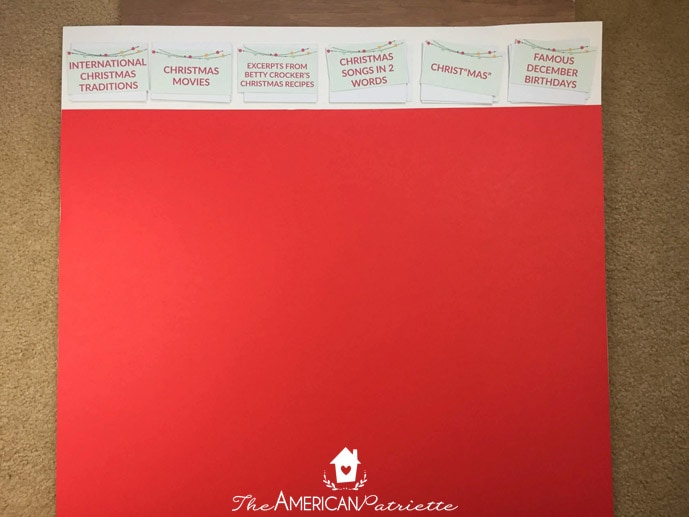 Line up your categories & dollar amounts/clues according to the board assembly instructions (you want to make sure the categories are in the correct order – this will make your job as the host a lot easier as you follow along on your clue/answer sheet).

Then lay out the papers and begin taping – just at the very top of each piece of paper – to the posterboard. 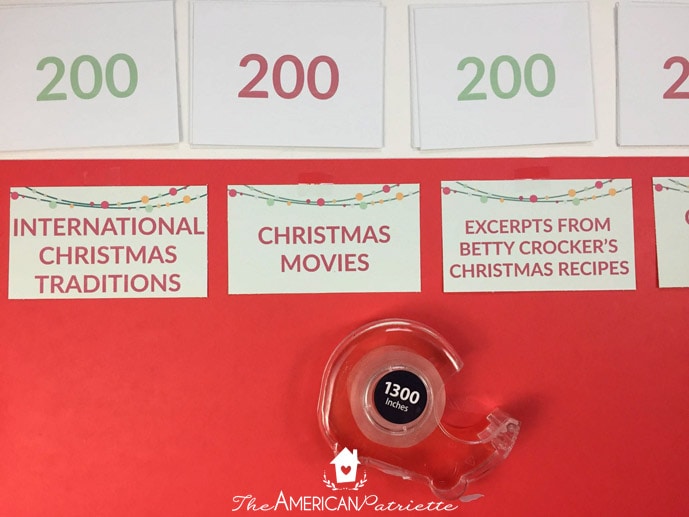 You may have to play around with centering things, but this actually didn’t take me long at all – maybe about 10 minutes total to get all of these lined up and taped to the board. 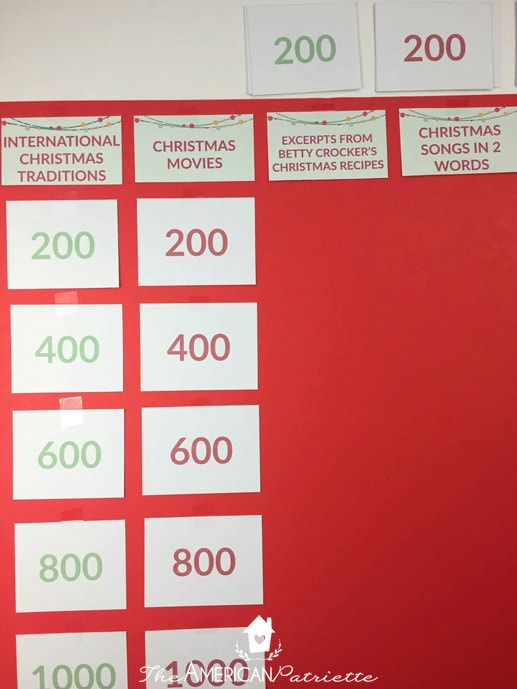 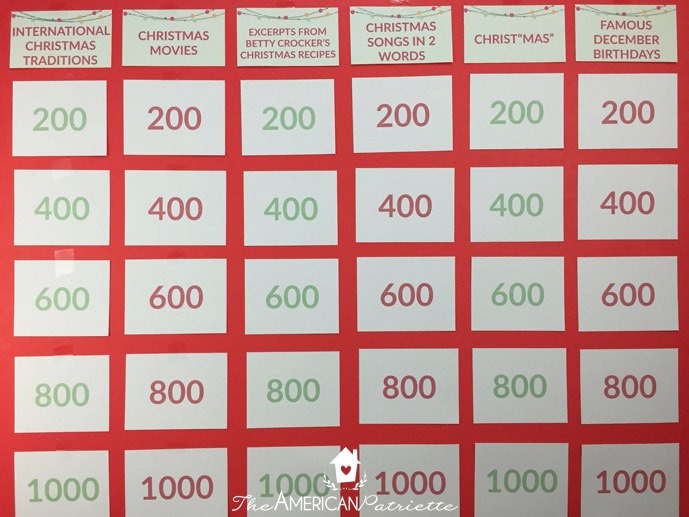 That’s it! Now repeat and do the same thing for Round 2 on the back of the posterboard.

When you’re actually playing the game, just easily remove the dollar amount when it’s selected by a player/team and read the clue on the back of the card. Remove that card from the game completely once you’ve moved onto the next category/dollar amount.

Print out the remaining papers you’ll need for game play: 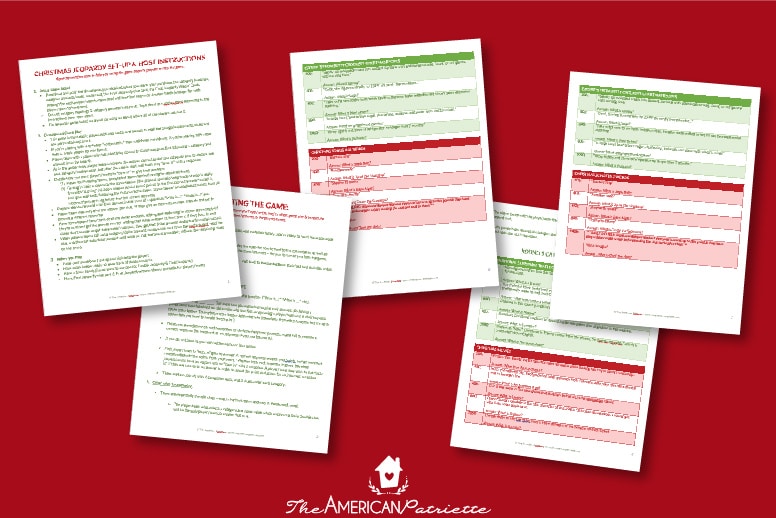 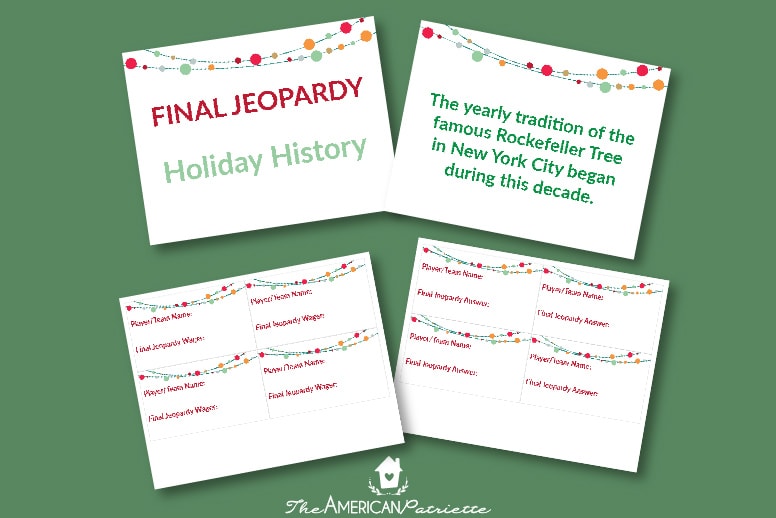 Have fun playing this super fun game with family & friends!