You are here: Home / Life & Family / Board Games for Road Trips
17 shares As you prepare for some group travels for spring break (and summer! – it isn’t too far around the corner!), I wanted to share some board games for road trips that you can play with the folks in your car. There are tons of road trip activity ideas for younger kiddos on Pinterest, but Traffic Sign Bingo and the Alphabet Game probably don’t scream “FUN!” to a group of teens and adults who are traveling together in a vehicle for several hours. My husband and I love board games, and we figure a lot of other people do too! Here are five board game ideas for you and your family that are easy for older kids, teenagers, and adults to play with each other in the car, and the driver can participate in all of these, too! I give tips for each of them on how you can tailor them to play in the car when you’re not all gathered around a table facing each other with a flat surface in front of you. Game Description: Though a popular party game that I’m sure most of you are familiar with, if you haven’t yet played this game, I’ll tell you it’s a really fun guessing game! The object of the game is to get your team to guess more terms than the other team, but the catch is you can’t say the “taboo words” on the card of the term you’re trying to get your team to guess. This game has a really fun challenge to it.

Modifying for the Car: This one’s actually pretty easy for traveling! Not a lot of tailoring required except that it may be easier to use the timer on your phone rather than the sand timer that comes with the game. Though the driver can’t give clues, he/she can certainly still make guesses. Game Description: This is basically 20 Questions in board game form. My husband loves this game. It’s a great and simple way to pass the time in the car.

Modifying for the Car: Not much modification required for this game, either! This one’s super easy to play in a vehicle, and you don’t really need to tailor anything for the driver, either. They can fully participate since it’s just a guessing game for everyone! Same with Taboo – just use the timer on someone’s phone rather than the sand timer that comes with the board game. Tip: there are lots of mirrors in/on cars, so just make sure people can’t see their own card on their headband in a mirror! 🙂 Number of players: 2+ (preferably at least 3, but you can just turn this into a regular pass-the-time-trivia-reading-game if you want)

Game Description: A fun trivia game with several twists to make it more interactive. We’ve played this game a lot with Aaron’s side of the family and with our friends, and everyone who has played it with us loves it. The trivia can be challenging, but you don’t have to be a huge trivia buff in order to enjoy the game, especially since there are so many category options that you can choose from. We will often play on teams so more than 4 people can play.

Modifying for the car: If you want to play by the exact rules of Bezzerwizzer, decide before your trip how you want to handle “Bezzing in,” “Zwapping,” and organizing the category tiles as you draw them. You can consider making up game cards for each player so you can write down your category options and record “Bezzing” and “Zwapping” on paper rather than using the game tiles in a moving vehicle when you don’t have a big table to play on in front of you. The driver can easily be part of a team, they just obviously can’t give clues (which isn’t a huge component of the game anyway). Or, you could just use the trivia cards by themselves to read out questions to each other and not even play by the specific rules of the game – you could just record correct guesses and still have a friendly competition that way. Game Description: Players try to get their team to guess the 10 clues on the card that contain the “Buzz Word” before the timer. When the timer goes off, the other team has a chance to steal the opposite team’s un-guessed clues.

Modifying for the Car: As with the other games, use your phone as a timer instead of the sand timer that comes with the game. Again, the driver can easily participate in this game by being a guesser. Game Description: Players try to get their team to correctly guess terms (code names) and prevent their team from correctly guessing the other team’s terms and from guessing the “assassin” term. I got this game for Aaron for Christmas and we’ve played it A LOT with his side of the family and some of our friends. We’re all addicted! This is a really fun game with a great thinking challenge!

Modifying for the Car: Before your trip, take a few minutes to make several different layouts of cards (5 rows of 5 as you see in the photos on the phones above) and take pictures of them with your phone. As you play each round, the person who took the photos can text a photo of that round’s layout to the others in the car so everyone playing can see the “board.” You really only need a couple of phones for this depending on how many people are playing since people can look off of each other. When it comes to covering up the guessed clues, use a photo editing app to mark off the code names that have been guessed by each team. The driver can easily participate; people will just have to read out the code names to him/her, and the driver won’t be able to be the Spymaster, but that’s ok! Guessing is really fun. The two Spymasters in each round just need to make sure they’re in agreement on how they’re looking at the “board” so they can properly give the clues.

I’m a big believer in board games! They’re such a great way to pass the time, get you to think outside the box (yes, pun totally intended), and connect with others! I hope these five suggestions help make a family road trip and/or a road trip with friends even more fun and enjoyable!

Want to remember this list for all of your road trips? Pin this to your favorite Pinterest board for family fun time and time again! 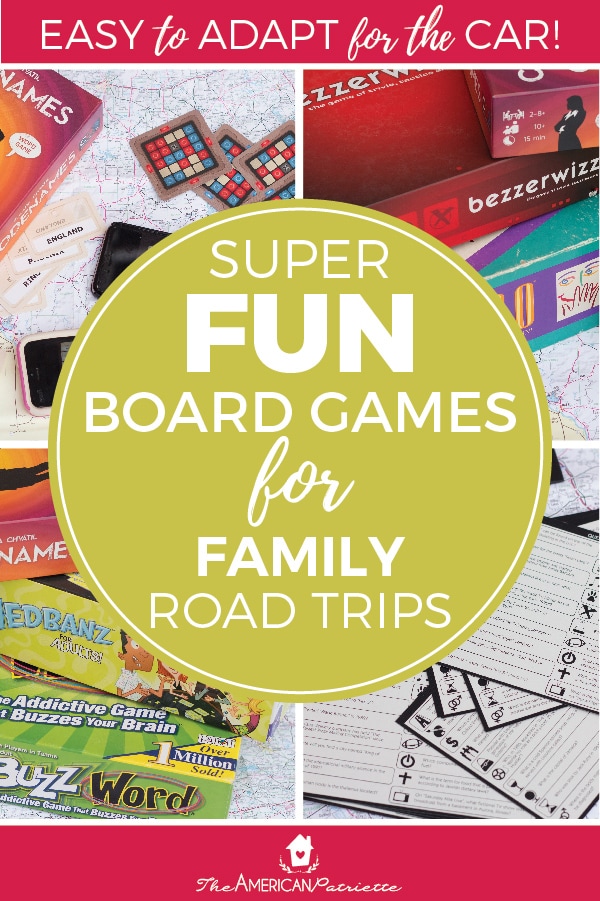